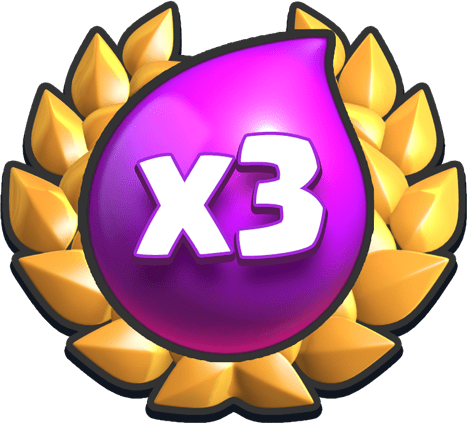 Double elixir is similar to a normal game, you can basically play any good 1v1 deck. The only difference is that you'll be able to play more aggressively from the beginning.

You'll have a LOT of elixir. It is good to use a deck that is more expensive, so you can overwhelm your opponent. You may even lose a tower or two, then win with a 3-crown.

In this challenge, control decks that require a lot of skill don't work that well. During triple elixir, it's hard to defend the massive pushes.

Go for a second tower

During double or triple elixir, it is really hard to defend the lower-hp tower. You can be spell-cycled more easily, the opponent has more elixir to build larger pushes. The best defense is offense!

Don't overcommit on defense, go on offense into other lane. There's a big chance, the game will end up 2:1 or 3:2.

What cards to use?

Certain cards work well in the current meta. If you're lucky to have them.

It has a great synergy with PEKKA and Mega Knight as a support card.

Popular cheap cycle cards and great support for your tank or Miner pushes. Using them allows you to cycle back to your big units faster.

This meta is full of PEKKAs, you have to have a way to deal with them. Either using PEKKA yourself, using Inferno Dragon or Tower or swarm cards. When using swarms, make sure to bait the spell beforehand.

Try using off-meta win conditions. With so much concentration on ground defense (PEKKA, Mega Knight), you can slip a Balloon by.

With Bats in meta, people usually run Zap instead of The Log, take advantage of that with a Barrel.

Don't forget spells! At least one cheap and one bigger. With so many units on the field, you're sure to make some positive elixir trades.

When using a big spell, try to hit a tower too. Every bit of damage counts.

During double and triple elixir, you'll have enough elixir, so you don't really need a pump.

As pros on twitter and youtubers share new decks, the challenge meta shifts, which means that what worked in the first day, may not work the second day. Make sure to come back here to check the current best decks for the challenge.

Few decks for your inspiration, that I think may work in this challenge.