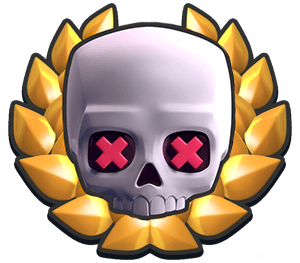 How to think about a challenge

In this guide, you'll find a more general approach when thinking about a challenge, with examples applying to this specific Sudden Death challenge.

I just want to see the decks!

What special conditions and rules are there? How are they going to affect the match?

Special rules not only affect the cards and decks used, but they can dictate the way you need to play.

The goal is to take one tower first. Nothing else matters. You don't have to think about surviving 3 minutes. You don't care about going 2:1, about the HP on your second tower (as long as it's not zero).

So you either need to be so aggressive, that your opponent will lose the game fast. Or you need to defend his pushes and counterpush and deal more damage.

Double elixir from the beginning

You will have more elixir from the beginning. So attacking and defending will be easier. You can afford to make a bigger push or to cycle faster.

What is the current meta? What cards are generally played in challenges?

There are universally good cards, that work well in most decks and across different metas.

Then you have more specific meta-dependent cards, either win conditions or support cards. Their popularity changes with different meta.

You have to be able to counter the currently popular cards.

You need to be able to defend against cards that most of the players will use. This affects mainly the defensive and support cards in your deck.

While having a usable win condition.

Perfect defense will not win you any games if you're not able to take advantage of it and attack. You need to have a win condition or two in your deck. If you're not that experienced, it's best to stick with what works.

What cards and deck archetypes will work?

If the challenge is not "serious", you can experiment more. But if you care about winning, especially in 12-win challenge for 100 gems, it's necessary to stick to more "serious" decks.

Do not gamble and rely on luck

Yes, you can win a first few matches with Rage eBarbs Loon Graveyard Clone Mirror Golem deck. But around 9 wins, you'll be facing players that know how to defend eBarbs. And how to punish you for it.

If you want to get to 12 wins, you need to have a strategy (deck) that is consistent, solid and is not relying on luck or a bad rotation of your opponent's hand.

The best way to get there is to take a known working deck and use it, or change one or two cards to adapt to the challenge.

Being able to deal more damage to your opponent than he does to you is the key to winning this challenge. Cycle decks and decks with solid defense work well.

Beatdown is usually relying on gaining elixir advantage during longer period of time and then punishing with a huge push. Unless you know how to defend perfectly, you will have a hard time doing that.

Double elixir from the beginning

Having so much elixir may tempt you to rush and overcommit. It may work, if you're lucky. But it will probably backfire. Your opponent defends and then counterpushes with an attack you won't be able to defend.

Yes, you can afford to spend more, but as always, patience is the key in this challenge too, same as with any other game mode.

As pros on twitter and youtubers share new decks, the challenge meta shifts, which means that what worked in the first day, may not work the second day. Make sure to come back here to check the current best decks for the challenge.

What cards to use?

Win conditions that can take the tower fast work really well. Having more elixir, you can afford to have more than one in the deck.

If you bait out a spell, you can punish your opponent with another swarm unit. Having at least two is a viable defensive / offensive strategy.

Good cards to defend, make positive elixir trades and cycle faster to your win conditions. They fit into any deck.

Freeze is an all-in card that works really well, you can take the tower on the first push. If you succeed you don't have to worry about a counter attack.

All spells work in this challenge. You can even try having two cheap spells, it allows you to cycle faster to your win condition while supporting it by those spells.

Hog and Balloon are very popular, you need to have a way to deal with them. A defensive building can get a lot of value.

Few decks for your inspiration, that I think may work in this challenge.