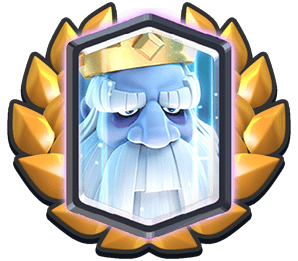 In the first few hours of the challenge, it is usually the easiest to win. As the time goes by, the challenge meta shifts, the players learn to counter the card and it gets harder.

Decks in this challenge are not perfect

Cards, that are normally easily countered can be a real pain when the decks are bad and there are no counters for them. Take advantage of that!

When there's no big or even small spell, you can stack your troops in one lane and not be afraid of having them all taken out by a single spell.

Or you can bridge-spam the solo unit, knowing that there's no good counter in opponent's hand.

Both you and your opponent have the same decks and the same starting hand. So you know what to expect. You know all the counters and synergies and win conditions.

Make sure to remember your deck! Are there big spells? Small spells? What are the win conditions? Are there any cards for which there's no counter?

When to use Mirror

Using Mirror correctly is often the strategic move that wins you the game. It is hard to make general tips for it, maybe just one: don't overuse it.

If you know your opponent has trouble countering one of your units, play it ... and then again!

If there are no spells, you can stack up multiple troops as a support for your tank. Two Muskies, Ghosts, Ice Wizards etc.

And sometimes you can just mirror the big spell for a positive elixir trade if your opponent stacks up his troops after seeing you playing it.

This is a universal tip for any match. Don't rush, play patiently, make positive elixir trades on defense, counterpush with your remaining troops etc. If you risk, dump all your elixir at the bridge, hoping to surprise your enemy, there's a high chance you'll fail. Especially against better players.

Fast cheap invisible ground mini-tank with a bit of splash damage. It can't be attacked while invisible, but spells and splash still damage it.

Even when invisible, spells and splash damage still affect it:

Swarm troops can counter it too, if surrounded correctly:

Beware! Two ghosts just pass by each other. And troops or towers ignore him when invisible!

It has a little splash attack, so it can clear weaker swarm units. You can play him behind punish troops:

You can use it to take out the troops defending your attack:

Beware! It is ignored by the tower when invisible, it doesn't tank for: